Akshay Kumar, Notorious Prankster, Helped Rakul Preet Over A Puddle. And Then… 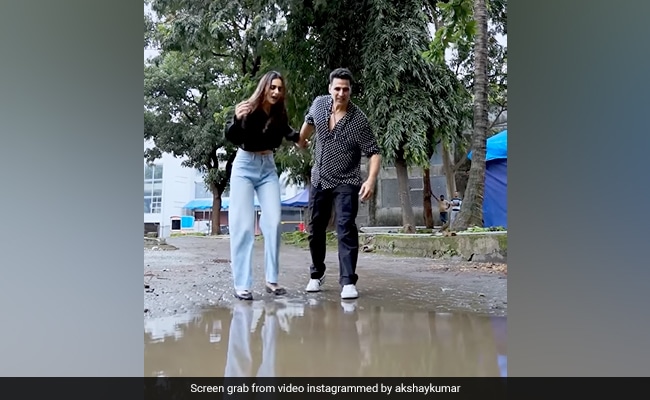 Akshay Kumar’s reputation as a prankster on a film set precedes him and lest we forget this side of the actor, the Khiladi star is back with another practical joke. This time, on the receiving end of the seemingly choreographed “prank” is his Cuttputlli co-star Rakul Preet Singh. In a video shared by Akshay Kumar on Instagram, the actor and Rakul Preet Singh – who play a couple in the film – are seen walking on a road, holding hands. Their romantic stroll gets interrupted when they run into a huge pothole in the middle of the street, filled with muddy water. Like a doting partner, Akshay does not allow Rakul to walk through the puddle. Instead, he uses two bricks, placing them one after another for Rakul Preet to walk on.

It all goes well until Rakul Preet Singh reaches the centre of the large puddle. Once she is there, Akshay Kumar refuses to place a brick in front of her to step on, leaving her in the middle of the large pothole. He walks away, chuckling and quoting a dialogue from the film, “Killer ke saath power nahi, mind game khelna chahiye.”

The video ends with Rakul Preet Singh chasing Akshay Kumar and the song Saathiya from the film is added to the background. The caption attached to the clip read, “It was all fun and games until someone decided to play mind games. Make your fun reels with a twist on Saathiya. Looking forward to sharing the best ones.”

A few years ago, on the sets of the film Gold, Akshay Kumar played a much more real prank on his co-star Mouni Roy. In a video shared online, Mouni receives a call from a “BBC reporter”. While Mouni animatedly answers the questions by the reporter, Akshay Kumar creeps up behind her and asks, “What do you think about the London wind?” causing Mouni to realise that it was a prank call engineered by Akshay Kumar.

A few days ago, Akshay Kumar shared the trailer of Cuttputlli with the caption, “Murders, 1 City, A Cop and A Serial-Killer out on the loose.”

Cuttputlli will release on the OTT platform Disney + Hotstar on September 2. The film also stars Chandrachur Singh and Sargun Mehta in important roles.