BJP leader Sonali Phogat’s body had “multiple blunt force injuries”, an autopsy revealed today hours after two of her associates were charged with her murder. Both were arrested from Goa late this evening.

“There are multiple blunt force injuries over the body. In view of the above, the manner of death is for the investigating officer to ascertain,” the post-mortem report said on the Bigg Boss star whose death has stunned the political and entertainment world.

“Women police officers who conducted a physical examination of Sonali Phogat’s body have not found any sharp-edged injuries on the body,” police said.

Sonali Phogat’s personal assistant Sudhir Sangwan and his friend Sukhwinder Wasi, who were with her when she arrived in Goa on Monday, have been charged and arrested.

Sonali Phogat, 43, was declared dead at the St Anthony Hospital at Anjuna in North Goa on Tuesday morning. Her family questioned initial reports that she had died of a cardiac arrest. 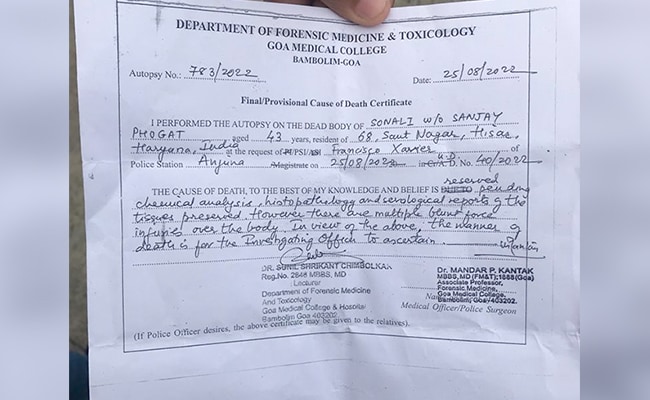 The family wanted the post-mortem in Delhi’s AIIMS but agreed to one in Goa after the police filed a murder case.

Her brother Rinku Dhaka filed a complaint alleging that his sister was raped and murdered by Sudhir Sangwan and Sukhwinder three years ago. He claimed she was being blackmailed with an explicit video.

“She told us something was mixed with her food. Arrest those whom we are suspecting,” her brother told NDTV.

Rinku said Sonali Phogat had spoken to her mother, sister and brother-in-law a few hours before her death. She “sounded disturbed” and shared her misgivings about her assistants, he said, adding that she had decided to file cases against them.

Rinku Dhaka claimed Sudhir Sangwan had threatened to destroy his sister’s political and acting career and had seized her phones, property records, ATM cards, and house keys. CCTV cameras, laptops and other gadgets have gone missing from her farmhouse in Haryana after her death.

Sonali Phogat, who rose to fame with her TikTok videos, contested the 2019 Haryana election as a BJP candidate but lost to then Congress leader Kuldeep Bishnoi (he has since joined the BJP). She also appeared in the reality show Bigg Boss in 2020.

Her 15-year-old daughter Yashodhara has also sought justice for her mother. Sonali Phogat’s husband died in 2016.