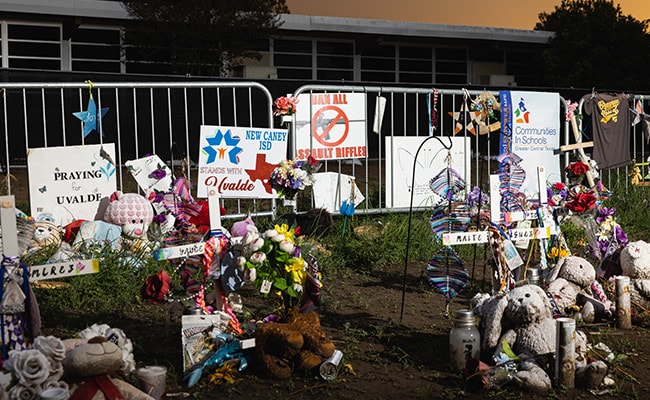 19 Children and two teachers were killed in the May 24 shooting.

The widely criticized police officer in charge of the response to the Uvalde, Texas school shooting that saw 19 children and two teachers killed was fired Wednesday, US media reported.

The Uvalde school board voted unanimously to terminate the contract of district police chief Pete Arredondo, the Texas Tribune reported.

The state’s public safety chief previously said Arredondo had placed “the lives of officers before the lives of children” and made “terrible decisions” while managing the crime scene.

Nineteen young children and two teachers were killed when a teenage gunman went on a rampage at Robb Elementary School on May 24 in America’s worst school shooting in a decade. Police eventually shot and killed the gunman.

Local police have been under intense scrutiny since it emerged that more than a dozen officers waited for over an hour outside a pair of adjoining classrooms where the shooting was taking place and did nothing as children lay dead or dying inside.

Arredondo, who was suspended in June pending an investigation, earlier on Wednesday asked for his suspension to be lifted through a statement from his lawyer, criticizing his treatment since the shooting.

“Chief Arredondo will not participate in his own illegal and unconstitutional public lynching and respectfully requests the Board immediately reinstate him, with all backpay and benefits and close the complaint as unfounded,” lawyer George Hyde said in a statement released shortly before the school board’s vote.

Texas state lawmakers also slammed Arredondo in a report last month, saying he “did not assume his preassigned responsibility of incident command” and made analytical errors because he did not have all the necessary information.

The lawmakers said the situation was “chaotic” due to the 376 on-scene officers’ “lackadaisical approach” to subduing the gunman.

They said no other officers offered to help or replace Arredondo during the massacre.

Seventy-three minutes elapsed between the first officers’ arrival and the shooter’s death, an “unacceptably long period of time.”

“The void of leadership could have contributed to the loss of life,” the report said.

“It is plausible that some victims could have survived if they had not had to wait 73 additional minutes for rescue,” according to the report.

Following the release of the Texas lawmakers’ report, local media reported that Uvalde police lieutenant Mariano Pargas had been suspended while the city investigated his role in the shooting response.

The United States has faced a spate of brutal gun massacres in recent months, including at a grocery store in a predominately Black neighborhood in New York state and at an Independence Day parade in Illinois.

In June, US lawmakers broke a decades-long stalemate on firearms control, passing the first major safety regulations in almost 30 years, less than 24 hours after the Supreme Court bolstered the constitutional right to bear arms.