Nearby Residents Vacate Homes Ahead Of Demolition 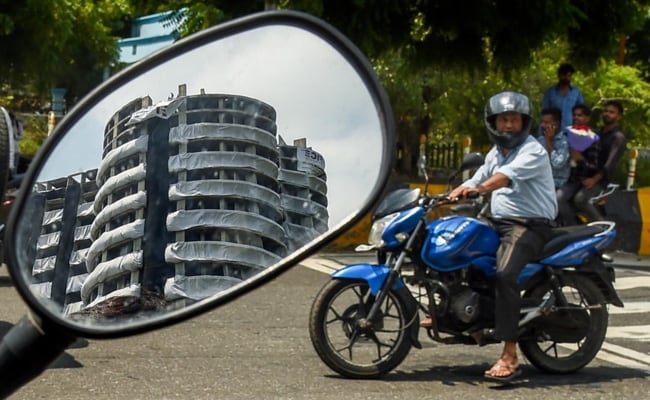 With less than 24 hours left for the demolition of Supertech’s twin towers in Sector 93-A of Noida, a large number of residents of Emerald Court and ATS Village societies, which are located adjacent to the skyscrapers, have left their abode temporarily.

According to representatives of a task force made for the successful execution of the demolition exercise, residents have started leaving their homes and have gone either on holidays or shifted to their relatives’ place.

Avinash Rai, a member of the task force, said all preparations have almost been completed and the residents will leave their homes by 7 am on Sunday.

“The supply of electricity, water and LPG will be disconnected in the societies tomorrow morning to avoid any untoward incident. Nearly 35-40 per cent residents have already left the societies and the remaining will leave by 7 am tomorrow. We are also removing additional cars and other vehicles from the area,” Rai told PTI.

He said all things are in place and they are ready for the demolition of the twin towers as per the schedule.

Taller than Delhi’s iconic Qutub Minar, Apex and Ceyane towers are set to be demolished at 2.30 pm.

The Supreme Court on August 31 last year ordered the demolition of the towers for the violation of building norms, holding that illegal construction has to be dealt with strictly to ensure compliance of the law.

Dinesh Kaushik, a resident of Emerald Court, said he has decided to go to a nearby hill station for two days.

“I am taking my family on a holiday and will return on Monday. I am also taking my pet along with me as I can’t leave it here. Though we will be out of town but we will be concerned about our belongings at home as they do not get damaged due to the explosion,” Kaushik said as he drove his car out of the society.

Another resident, Prabhash Maurya, said some of his neighbours have already left and headed for a holiday.

“Now, I am also going to my sister’s place in Greater Noida and will return here on Monday evening. We are worried about the structural safety of towers in the society as they are located close to the buildings to be demolished,” Maurya said.

Over 5,000 residents of Emerald Court and ATS Village will be evacuated by 7 am on Sunday.

Around 2,700 vehicles belonging to them will also be removed from the premises and the residents will take away around 150-200 of their pets.

A resident of ATS Village society said teams of some NGOs were seen lifting stray animals, including dogs and cats, in the vicinity of the structures to be demolished.

Residents Welfare Associations of nearby societies have also issued advisories for their residents and made lodging arrangements for them in the club house.

Srishti Residents Welfare Association (SRWA) advised its residents to keep their doors and windows shut during and after the demolition to avoid plume of dust emanating out of the rubble.

“The SRWA is making arrangements for stay in the club house for senior citizens or for people suffering from respiratory problems. Residents desirous of using the services may shift to the club house,” an advisory from the RWA said.

It also advised residents to cover all electronics in balconies and external units of ACs and washing machines. Switch off ACs during the blast and also try to shift plants from balconies indoors or cover them, it said.

“Housekeeping persons would be available for cleaning dust after the implosion. Guests are not allowed in the premises during the time,” it said.

Dushyant Singh, a resident of Silver City Society, which is located in the vicinity, said their RWA has made arrangements for the residents of Emerald Court and ATS village to stay at their community centre.

“Lodging arrangements have been made for them. The RWA has also advised residents to remove any vulnerable wall hangings that may break due to slight vibration,” Singh said.

The residents will be allowed to return only after 4 pm following safety clearance from officials. Before leaving their societies, they have taken adequate precautions to ensure their home appliances and plants are not damaged.

“I have covered all electronic items, including TV, Fridge, AC, fan and microwave to avoid dust. We have also covered our balconies with strong tarpaulin sheets to ensure the dust does not enter our house,” Archana Tiwari, a resident of Emerald Court, said while leaving for Dehradun on a short holiday.

The nearly 100-metre-tall towers, which came up illegally on Emerald Court’s premises, will become India’s tallest structures to be demolished by implosion technique.

An exclusion zone will be created up to 500 metres around the twin towers where no human or animal will be allowed, except for a team of Indian and foreign blasters engaged in the demolition of the structures.