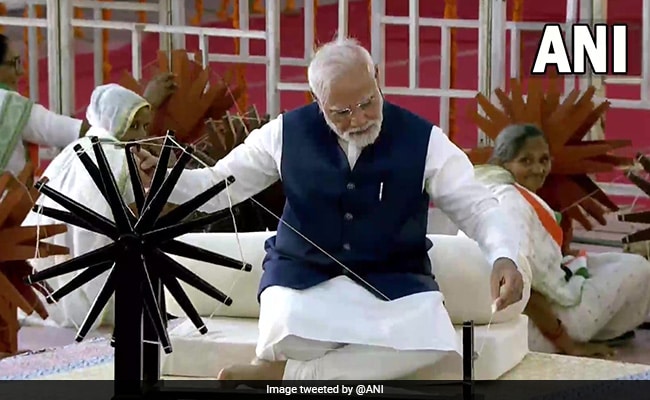 The event featured an exhibition showcasing the ‘Evolution of Charkhas’.

In a one of its kind event being held as part of Azadi ka Amrit Mahotsav, Khadi Utsav is being organised to pay tribute to khadi and its importance during the freedom struggle.

The Utsav is being organized at Sabarmati Riverfront, Ahmedabad. Around 7,500 women khadi artisans from various districts of Gujarat participated in the event. The event witnessed the women spinning charkha live at the same time and at the same place.

The event featured an exhibition showcasing the ‘Evolution of Charkhas’ by displaying 22 Charkhas from different generations used since 1920s. It includes charkhas like ‘Yerwada Charkha’ which symbolises the charkhas used during the freedom struggle, to the charkhas with the latest innovations and technology used today.

According to an official statement, it has been a constant endeavour of Prime Minister Narendra Modi to popularise Khadi, generate awareness about Khadi products and promote the use of Khadi amongst youth.