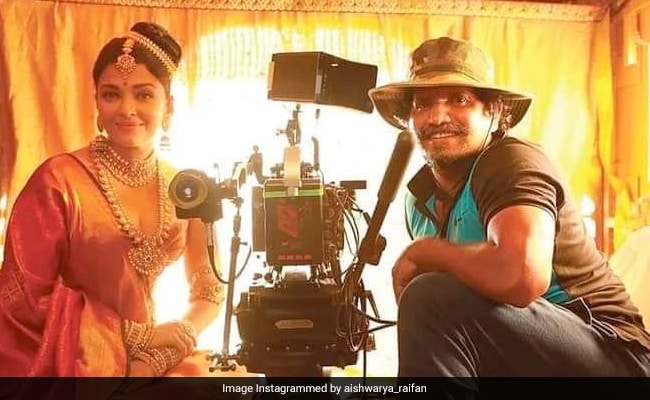 Aishwarya Rai Bachchan on the sets of film. (courtesy aishwarya_raifan)

There’s still time to the release of Mani Ratnam’s magnum opus Ponniyin Selvan but these behind-the-scene pictures are making the wait for the film so difficult. The reason we brought this up today is because we chanced upon a picture of Aishwarya Rai Bachchan from the sets of Ponniyin Selvan and stunning can’t even begin to describe it. In the picture, Aishwarya Rai Bachchan, dressed in a red saree, can be seen happily posing along with a crew member. The picture has been curated by several fan pages dedicated to her on social media.

Last month, Aishwarya Rai Bachhchan shared a poster from the film and she wrote: “Vengeance has a beautiful face! Meet Nandini, the queen of Pazhuvoor! PS 1 releasing in theatres on 30th September in Tamil, Hindi, Telugu, Malayalam and Kannada.”

Here’s another poster that she shared earlier this year.

Besides Aishwarya Rai Bachchan, Vikram and Trisha, the film also stars Prakash Raj, Jayaram, Jayam Ravi and Aishwarya Lekshmi, to name a few. It’s music has been composed by AR Rahman. Produced by Lyca Productions, the first part of magnum opus Ponniyin Selvan will hit the theatres on September 30 this year in five languages – Tamil, Hindi, Telugu, Malayalam and Kannada.

Aishwarya Rai Bachchan has previously worked with the filmmaker in the 2007 film Guru and the 2010 film Raavan, both of which featured Aishwarya’s husband Abhishek Bachchan. The duo even worked together in the 1997 Tamil film Iruvar, which marked Aishwarya’s debut in the Tamil film industry.