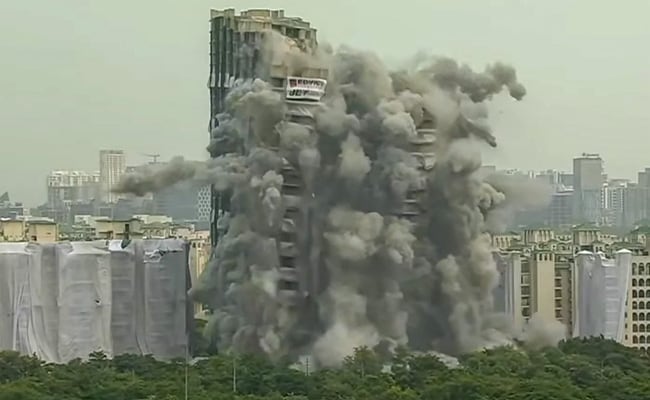 Noida twin towers were brought down in 9 seconds, courtesy 3,700 kg of explosives.

The 100-metre tall Supertech twin towers’ demolition in Uttar Pradesh’s Noida went according to plan, said a top official in charge of the operation, adding that a boundary wall and some glass windows were damaged at a neighbouring society as the towers came down.

“A 10-metre boundary wall collapsed and some glass windows were shattered at ATS village. Supertech Emerald (another neighbouring society) did not suffer any damage,” said DCP S Rajesh, in charge commander of the demolition operation.

The demolition exercise took place under a Rs 100 crore insurance policy. This will cover damage to adjacent buildings, if any. The premium and other costs have to be borne by Supertech. The cost of the demolition itself is estimated at about Rs 20 crore.

Officials involved with the operation had earlier said about 55,000 tonnes of debris would be generated. It may take up to three months to clear the debris. The waste will be dumped at designated areas.

The towers were brought down in 9 seconds, courtesy 3,700 kg of explosives.

Water sprinklers and anti-smog guns have already been brought in at the site to mitigate dust, an official said.

Supertech said it has incurred a loss of about Rs 500 crore, including construction and interest costs, because of the demolition of its twin towers in Noida.

“Our overall loss is around Rs 500 crore, taking into account the amount we have spent on land and construction cost, the charges paid to authorities for various approvals, interest paid to banks over the years and the 12 per cent interest paid back to buyers of these two towers, among other costs,” Supertech’s chairman RK Arora told news agency PTI today.

The demolition caps a nine-year legal battle between residents of Supertech Emerald Court in Sector 93A and the realtor over the two towers.