4 Escaped Prisoners Beaten To Death By Villagers In Meghalaya 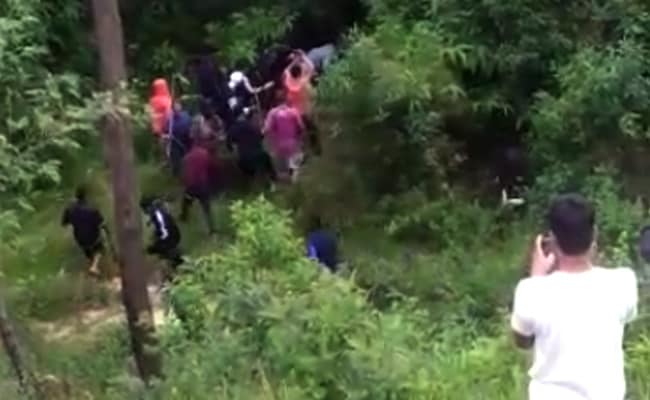 Four of the five undertrial prisoners, who escaped from Jowai district prison on Saturday, have been beaten to death allegedly by the residents of Shangpung village in Meghalaya’s Jaintia hills.

Videos of the attack were widely circulated on social media on Sunday. In the videos, the villagers can be seen beating the escaped prisoners with rods and sticks.

The gang had fled from the Jowai district Jail on September 10, attacking a guard with a knife. A murder accused named “I Love You Talang” is among them, sources said. The other members are Ramesh Dkhar, Marsanki Tariang, Rikmenlang Lamare, Shidorki Dkhar and Lodestar Tang.

“Six prisoners escaped from the district jail at around 2 am,” Inspector General of Prisons Jerry FK Marak was quoted as saying by news agency Press Trust of India. The official is conducting a preliminary investigation into the matter.

The headman of Shangpung, R Rabon, said the men, after escaping, hid in a forest in Shangpung area.

They were discovered after one of the escapees went to a local tea shop to buy food and was identified by some of the locals.

The entire village came to know about it and they chased the prisoners who fled to the nearby forest. The villagers surrounded the area and after capturing them, thrashed the escapees.

From videos that have emerged, the mob could be seen mercilessly hitting the escapees with bamboo sticks till they collapsed.

The headman said four of the men died from the beating, while Ramesh Dkhar managed to escape from the jungle.