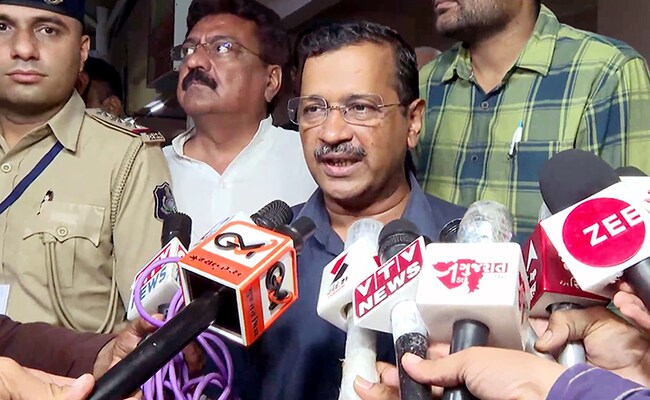 Gujarat: Every village head will get Rs 10,000 salary per month, said Arvind Kejriwal.

The Delhi Chief Minister, who arrived in the BJP-ruled state for a two-day campaign tour on Friday, was speaking at a conclave of sarpanchas (village heads) in Surendranagar.

Elections are due in Gujarat by year-end.

An AAP government will provide a salary of Rs 10,000 per month for the sarpanch and Rs 10 lakh for the village panchayat which would be transferred directly by the state government, Mr Kejriwal said.

Village Computer Entrepreneurs (VCEs) who work on commission basis will also get a salary of Rs 20,000, he added.

“A sarpanch wins an election in his village and people like and respect him. He is the leader of his village. After winning the election, the sarpanch spends money from his pocket because he has no funds for the work people want him to do,” Mr Kejriwal said at the townhall event in Surendranagar city.

When a sarpanch approaches an MLA or district official seeking funds, they ask for “commission”, the AAP leader said.

Every panchayat will get Rs 10 lakh directly from the government so that a sarpanch does not have to beg for funds for minor works related to water supply, roads or sanitation, he said.

All these promises will be fulfilled before February 28 next year, Mr Kejriwal added.

An AAP government will also start a school and ‘mohalla clinic’ in each of the 18,000 village panchayats in Gujarat, he said, claiming that in the party-ruled Punjab 100 mohalla clinics were opened in the first 75 days and all villages will get one in the next two or three years.

He appealed to sarpanchs and VCEs to promote the AAP in their villages.

“Had people been happy with the BJP, you would not have come to listen to us in this hall. Wherever I go (in Gujarat), a large number of people turn up because they are fed up with them (BJP) and their hooliganism. People want new hope,” he said.

Mr Kejriwal also claimed that if an election were to be held in Delhi today, “we will get more than 65 seats”.

He also reiterated the other promises he has made in Gujarat so far, including free and quality education and healthcare for all and Rs 1,000 allowance to women.

“I can see some magic happening in Gujarat this time. Until two months ago the atmosphere was not like this,” he said.

On the BJP’s criticism of him for promoting ‘revadi‘ (freebie) culture, he said the BJP was using the money collected by increasing taxes to “buy MLAs and topple elected governments.” “They have imposed so much tax… (but) they are not constructing schools, hospitals or spending money on water, electricity,” he said.

“They bought MLAs in Maharashtra, Madhya Pradesh, Karnataka, Goa, Manipur, Assam, Bihar, and now they are going to buy MLAs in Jharkhand. They had come to Delhi to purchase our MLAs for Rs 20 crore each,” he alleged.

“They could not get a single MLA from Delhi. All the MLAs are with us. We are honest people,” the AAP leader added.