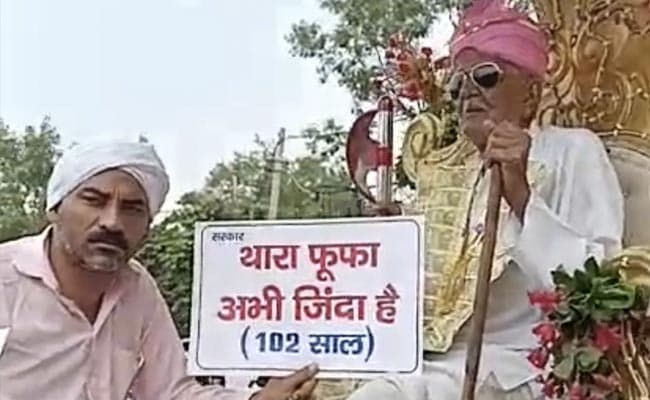 Haryana’s Duli Chand, from the Rohtak district, said he got his last old-age pension in March this year

A102-year-old man in Haryana, shown as dead on official records, on Wednesday came out in public to protest the state government’s decision to stop his pension. Duli Chand from Rohtak district appeared before the media to prove that he was alive. He later took out a procession in the city in support of his claim and appealed to the government to restore his pension at the earliest.

“I got my last old-age pension in March. After that, my pension was stopped as government records showed I was dead. Since then, I have been trying to prove that I am still alive, but in vain,” Mr Chand said. His identity proofs, including his Aadhar card, PAN card, family ID and bank statements, were presented before the media to prove the point.

His grandson said he had lodged a complaint with the Haryana Chief Minister’s Grievances Redressal and Monitoring System more than a month ago, though there was no response.

Naveen Jaihind, the former President of the Haryana unit of Aam Aadmi Party (AAP), who accompanied Mr Chand during his interaction with the media, demanded that his old-age pension be restored immediately.

“It is unfortunate that such elderly residents are being harassed by stopping their pension. No concrete action has been taken despite a complaint being lodged with the Chief Minister’s grievance redressal cell,” he complained.