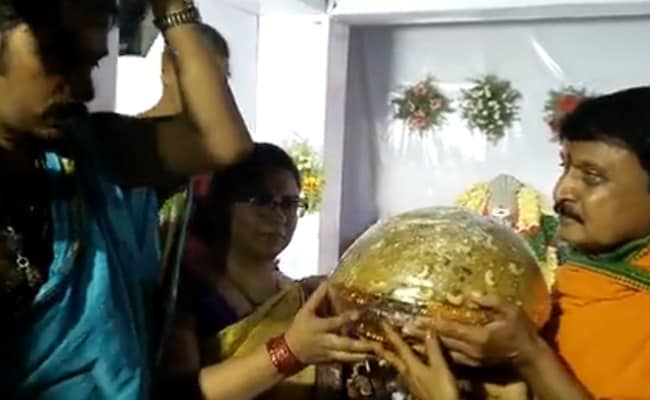 The couple who bought the laddoo was seen posing with it.

A laddoo prasad (sacred offering) at a Ganesh pandal in Hyderabad fetched a record Rs 45 lakh in an auction held on Saturday. The 12-kg laddoo was auctioned at almost double the price of the famous Balapur Ganesh laddoo, which went for Rs 24.60 lakh a day ago.

The Marakatha Shree Lakshmi Ganapati Utsav Pandal laddoo was auctioned for Rs 44,99,999, making it the highest bid for a laddoo not just in the twin cities of Hyderabad and Secunderabad, but across both the Telugu States (Telangana and Andhra Pradesh).

It’s a tradition to auction laddoos made for lord Ganesh as prasad and whoever wins is believed to get “God’s special blessing”. The locals believe that laddoo brings them good luck, health, wealth and prosperity.

A laddoo for Rs 44,99,999 from #Hyderabad Alwal Maragatham #LaksmiGanapathy was bought by couple Venkat Rao & Geethapriya… It’s a tradition to auction laddoo made for Ganeshji as Prasad & whoever wins is believed to get God’s special blessing #CostliestLaddoo@ndtv@ndtvindiapic.twitter.com/IWAzpBJgwF

While the Balapur laddoo was bought by a local farmer and realtor V Laxma Reddy for a whopping Rs 24.60 lakh, the Sri Lakshmi Ganapati laddoo of Kanajiguda Marakata was bid for Rs 45,99,999 by a couple, Geethapriya and Venkata Rao.

Visuals showed the couple posing with the laddoo. Venkata Rao was also seen carrying the laddoo on his head.

“The money from the auction is being used for developing temples in Balapur,” said Laxma Reddy, who is also a member of the Samithi.

The history of the auction of laddoos dates back to 1994 when it was successfully bid by a local farmer, Kolan Mohan Reddy, for Rs 450.

The auctioning of laddoo marks the start of the main Ganesh idol immersion procession in Hyderabad.