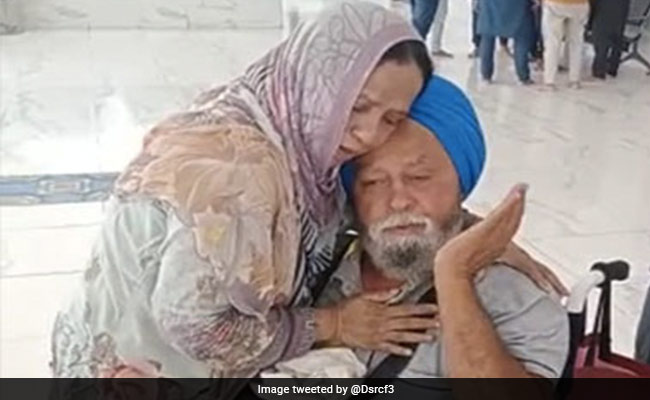 Jalandhar-based Sikh man Amarjit Singh’s happiness knew no bounds when he met his Muslim sister from Pakistan at Gurdwara Darbar Sahib in Kartarpur, 75 years after he was separated from his family at the time of Partition.

Mr Singh was left out in India along with his sister while his Muslim parents migrated to Pakistan at the time of Partition.

All eyes went teary as wheelchair-bound Amarjit Singh had an emotional meeting with his sister Kulsoom Akhtar at Gurdwara Darbar Sahib in Kartarpur in Pakistan’s Punjab province on Wednesday.

Mr Singh arrived in Pakistan via the Attari-Wagah border with a visa to meet his sister.

Ms Kulsoom, 65, could not control her emotions after seeing Mr Singh.

Both hugged each other and kept crying. She had travelled from her hometown in Faisalabad along with her son Shahzad Ahmed and other family members to meet her brother.

Talking to Pakistan’s Express Tribune, Ms Kulsoom said that her parents migrated to Pakistan from a suburb in Jalandhar in 1947, leaving behind her brother and a sister.

Ms Kulsoom said she was born in Pakistan and used to hear about her lost brother and sister from her mother. She said that her mother used to cry whenever she remembered her missing children.

She said that she did not expect that she would ever be able to meet her brother and sister. However, a few years ago, a friend of her father Sardar Dara Singh came to Pakistan from India and also met her.

Her mother told Sardar Dara Singh about her son and the daughter she left behind in India. She also told him the name of their village and the location of their house.

Sardar Dara Singh then visited her house in Padawan village and informed her that her son was alive but her daughter was dead.

Her son was named Amarjit Singh who was adopted by a Sikh family in 1947.

After getting the brother’s information, Ms Kulsoom connected with Mr Singh on WhatsApp and later decided to meet.

Ms Kulsoom, despite her severe back pain, mustered the courage to travel to Kartarpur just to meet her brother.

Mr Singh said that when he first learned that his real parents were in Pakistan and were Muslims, it was a shock to him. However, he comforted his heart that many families were separated from each other in addition to his own family.

He said that he always wanted to meet his real sister and brothers. He said that he is happy to know that three of his brothers are alive. However, one brother, who was in Germany, died.

He said he will now come to Pakistan to spend time with his family.

He also said that he also wants to take his family to India as well so that they could meet their Sikh family. Both the siblings had brought many gifts for each other.

Shahzad Ahmad, son of Ms Kulsoom, said that he used to hear about his uncle from his grandmother and mother. He said that all of the siblings were very young at the time of Partition.

“I understand that since my uncle was brought up by a Sikh family, he happens to be a Sikh, and my family and I have no problem with this,” he added.

Mr Shahzad said that he is happy that even after 75 years his mother has found her lost brother, Pakistan’s Express Tribune quoted him as saying.

This is the second time that the Kartarpur Corridor has reunited a family. In May, a woman born in a Sikh family who was adopted and raised by a Muslim couple met her brothers from India at Kartarpur.