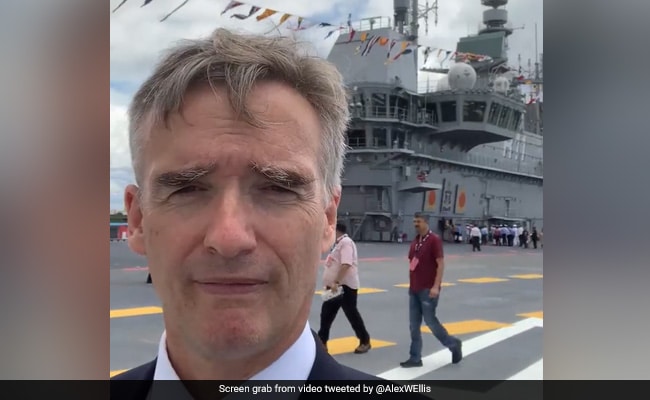 High Commissioner Alex Ellis said it was “a great day” for the Indian Navy and for open and free seas.

As Prime Minister Narendra Modi commissioned the country’s first home-built aircraft carrier on Friday and the Indian Navy adopted a new ensign, shedding its last remnants of colonial iconography, among those present was the British High Commissioner to India.

“Honoured to be present at the commissioning of #INSVikrant by @narendramodi – a great day for @indiannavy & for open & free seas,” High Commissioner Alex Ellis tweeted along with a video message from the flight deck of the massive aircraft carrier.

Honoured to be present at the commissioning of #INSVikrant by @narendramodi – a great day for 🇮🇳 @indiannavy & for open & free seas pic.twitter.com/grxwUQDNXz

After 17 years of construction and tests, PM Modi commissioned the INS Vikrant – the navy’s second operational aircraft carrier and the largest warship ever built in India – at a state-run shipyard, underlining his government’s efforts to boost domestic production to supply a military deployed on two contentious borders.

The Indian Navy also unveiled a new ensign, forgoing the colonial era Saint George’s Cross, and adopting a design that honours Chhatrapati Shivaji Maharaj, the founder of the Maratha kingdom who had a naval fleet.

“Till today the Indian naval flags carried a sign of slavery, which has been replaced with a new one inspired by Chhatrapati Shivaji Maharaj,” PM Modi said, before he commissioned INS Vikrant.

“Today, India has joined those countries in the world which can manufacture such a huge aircraft carrier with indigenous technology,” PM Modi said. “It is a symbol of indigenous potential, indigenous resources and indigenous skills.”

Designed to accommodate a crew of about 1,600 and a fleet of 30 aircraft, the Vikrant will rely on Russian-designed MIG-29K aircraft that already operate from India’s other carrier, the INS Vikramaditya, which India bought from Russia.

The Vikrant will significantly add to India’s maritime capabilities, allowing the navy to operate an aircraft carrier on each seaboard, alongside its 10 destroyers, 12 frigates and 20 corvettes.

“Security concerns in the Indo-Pacific region and the Indian Ocean have long been ignored,” PM Modi said. “But today this area is a major defence priority for our country.”