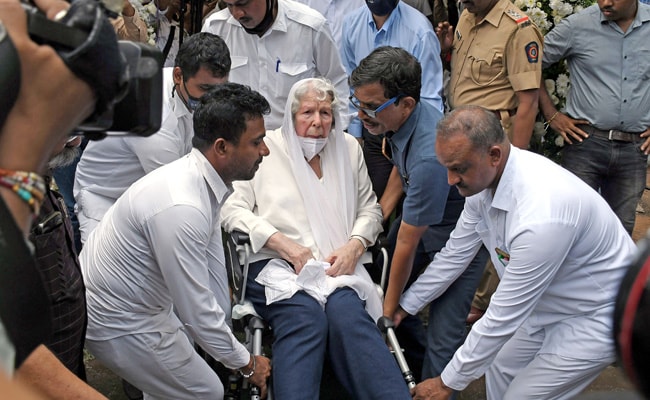 Cyrus Mistry, the former Tata Sons chairman who was killed in a road accident earlier this week, was cremated in the financial capital on Tuesday.

The funeral at central Mumbai’s Worli crematorium was attended by members of the closely knit Parsi community, some business leaders and politicians.

However, no other senior official from the Tata Group – with whom Mistry fought a bitter legal battle till the end – was seen at the funeral.

Madhu Kannan, one of the key executives handpicked by Mistry during his chairmanship of Tata Sons, was seen at the funeral.

Mistry’s body, decorated with white flowers, were brought from the state-run J J Hospital to the crematorium earlier in the morning and kept for friends and family to offer their prayers.

The last rites were performed in an electric crematorium just before noon.

A family priest performed the ritualistic prayers as per Parsi tradition before the last rites were held at a pre-decided time, as per those who attended the funeral.

A pandal was specially erected for the last rites at the crematorium, started by a few progressive people in the Parsi community in 2015 as an alternative to the old practice of leaving the body in the Tower of Silence.

Friends and family members started trickling in from early morning to offer their prayers at the pandal where light music played.

At the appointed time, the body was taken inside the electric crematorium for the last rites.

Only the closest of the relatives and friends were present in the room where the machine is kept and the media waited outside the gate of the crematorium.

Mistry, 54, who headed the salt-to-software conglomerate Tata Sons from 2012-16 before an unceremonious exit, and his friend Jahangir Pandole were killed in a road accident in Palghar district of Maharashtra on Sunday afternoon.

He was returning from a visit to Udvada in south Gujarat, which is the holiest place for people following the Zoroastrian faith.

On Sunday, the Mercedes SUV in which Cyrus Mistry and Pandole were travelling hit a divider on a bridge over the Surya river in Palghar district.

Well-known gynaecologist Anahita Pandole (55), who was driving the sports utility vehicle, and her husband Darius Pandole (60) were injured in the accident and are being treated at a local hospital in Mumbai.

The Mistry family had released advertisements in the morning papers announcing his demise and the time of the cremation, with a request not to offer condolence visits.