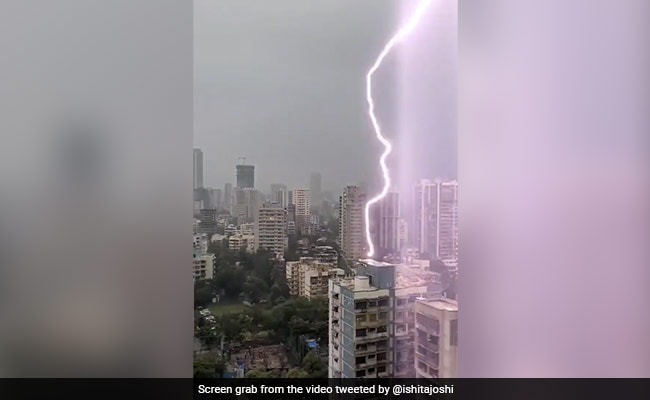 The video of lightning strike was captured from neighbouring building.

Mumbai witnessed heavy rainfall on Thursday evening, which affected road and rail traffic in some parts of the city, civic officials were quoted as saying by news agency PTI. This was the second consecutive day that heavy rain lashed Mumbai. On Wednesday too, the city had witnessed rain along with thunder and lightning. In the 24-hour period till 8 am on Thursday, the island city received 30.96 mm rainfall. Many people in Mumbai posted photos and videos of the rain and lightning, and some of them look scary.

One of the videos shows a lightning strike in Borivali West locality of Mumbai. According to the caption of the video, the bolt struck Neminath Building but no damage was reported.

“It surely was scary! Luckily they had installed a lightning rod in the bldg so If the lightning strikes it directly goes to the ground!” said the user who posted the clip on Twitter.

Borivali, Mumbai yesterday ⚡️
It surely was scary! Luckily they had installed a lightning rod in the bldg so If the lightning strikes it directly goes to the ground! #Mumbai#Borivalipic.twitter.com/KR94GedXwt

The eight-second video shows a thunderbolt hitting the building with a loud sound. The video was captured from a neighbouring building in the area.

The person holding the camera starts shaking as the bolt strikes the building.

The heavy rainfall caused water-logging in low-lying areas of Mumbai. There were also reports that some drains were overflowing.

The downpour affected the schedule of trains as tracks were waterlogged.

The regional office of India Meteorological Department (IMD) on Wednesday issued yellow alert for Mumbai, Thane, Palghar, Pune, Ratnagiri and Nashik, warning of heavy rainfall in these areas in the next five days.

Parts of Marathwada and Vidarbha will continue to receive showers till Sunday, the IMD forecast added.