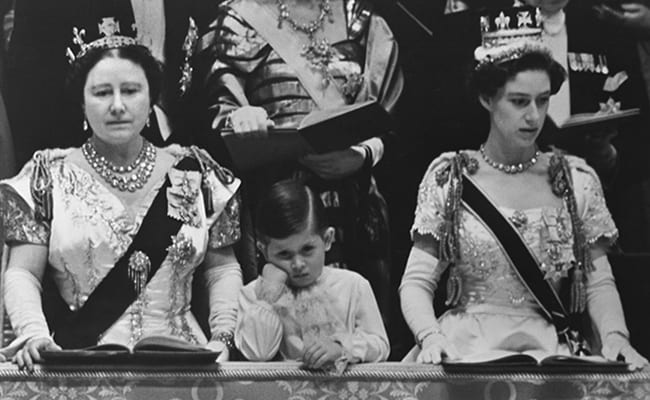 Charles at the coronation of his mother, Queen Elizabeth, in 1953. (Getty Image)

Seventy-three-year-old Charles, who became the monarch after the death of his mother Queen Elizabeth II on Thursday, is set to address his subjects today. The change happened after seven decades, and it’s still not clear when his coronation will take place as Britain is observing the 10-day mourning period. But nearly 70 years ago, in 1953, a four-and-half-year-old Charles looked bored during the coronation of his mother who acceded to the throne a year ago at the age of 25. The old photo is going viral on the internet.

In the photo, Charles is seen resting his head on his propped-up hand with an apathetic expression on his face. He is standing between his grandmother (Queen Elizabeth The Queen Mother) and aunt (Princess Margaret).

The black-and-white image is very similar to a photo of Charles’ grandson, Prince George, captured in 2017 as he attended the annual Trooping the Colour parade in honour of the Queen’s birthday.

According to an old article in People magazine, the Queen’s coronation began at 11.15am and lasted nearly three hours.

The Royal Family website said that Charles was the first child to witness his mother’s coronation as Sovereign. His sister, Princess Anne, was not allowed to attend as at two-years-old she was considered too young.

The website further said that Charles received a special hand-painted child-friendly invitation to the 1953 ceremony.

The photo was first posted by the Royal Collection Trust marked the 66th anniversary of the Queen’s coronation on June 2, 2019.

Elizabeth’s coronation was the first to ever be televised and drew 27 million views in the UK alone. Some behind-the-scene insights from the coronation were shared by Elizabeth in a BBC documentary series The Coronation in 2018.